In a “cabin in the clearing” in the late 1870’s, a mother and her small daughter were reading “the Heathens Woman’s Friend,” a missionary magazine. The little girl listened to a story with wide-eyed attention. At the end she looked up at her mother thoughtfully.
“Mother, how would it be if I should be a missionary when I grow up? “Why, I think it would be fine! “responded her mother. And these words were the inspiration for the career of Rebeca Parrish, a career which would take her half way around the world to the Philippine Islands to found the Mary Johnson Hospital in Manila.

When her parents died she had the responsibility of caring for her 5 brothers and sisters. After her graduation she taught school for 7 years. She continued her education and graduated as an MD in 1901 and served as an assistant physician till 1906.

With her schedule of burning the midnight oil she became ill and was unable to qualify as a missionary. However, she never lost hope. In the midst of a serious bout of illness she received the call to the mission field.

The Women’s Foreign Missionary Society appointed her as a medical missionary to the Philippines. In 6 months she recuperated well enough to make the trip and sailed in October, 1906.
By December 10 she had established her “Daily General Clinic” in a room of a Bible School, with very sparse furnishings.

Within a year she added a room with 10 bamboo cots and this became her hospital. She had to overcome all kinds of obstacles.
In 1908 with the donation of a man from Minneapolis, the cornerstone was laid for the Mary Johnson Hospital. She continued to serve until 1933 when she retired and returned to the US.

Hawthorne had one goal in mind in her younger years – to study medicine and go our as a medical missionary to the Philippines to help Rebecca Parrish whom she greatly admired.

After completing Medical school and her internship she went to the Philippines in 1925, where she became “one of them.”
She taught a SS class for many years on her Sundays off. One of her favorite songs was, “Lead on, O King Eternal.” Dr. Parrish said, “Her professional contribution was unexcelled and enhanced by her spirit.” Every phase of the work interested her.

Often at night when the work was finished, Rebecca and Hawthorne would go to the seashore to rest, council and plan together. Finally they would clasp each other’s hands and pray for divine guidance in their mammoth task.

When the war came, Hawthorne allied herself with the “Emmanuel Hospital.” They were allowed to carry on fairly freely under Japanese surveillance. She befriended American soldiers, which was forbidden. She and two missionaries aided the guerillas, with messages and supplies in any way they could.

Because of these activities they were taken to Santiago and put in cells for 105 days. They were then moved and in the new jail they were tortured. Finally one day, 5 women (including the 3 missionaries) and 29 men were blindfolded and marched away and executed. She was “faithful until death.” 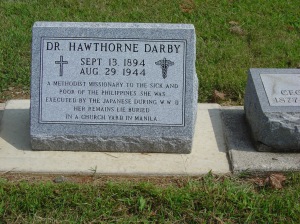 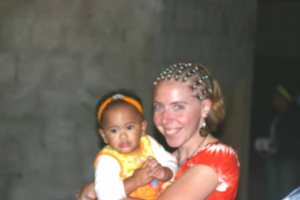 One thought on “OUR MISSIONARIES”